Aikido is considered a modern Japanese martial art with a very old tradition.

The founder, Morihei Ueshiba (1883-1969), who is referred to as O-Sensei or Great Teacher, created his martial art by amalgamating a number of older martial arts comprising techniques from  schools of Jujutsu, Kenjutsu and other Bujutsu weapons schools, and released his teachings to the world from his dojo in Iwama, Japan in 1942.

Aikido gained popularity as it was not just a martial art but also an approach to life, encompassing his philosophy of universal peace and reconciliation.

The name Aikido is formed by three Japanese kanji:

And so may be interpreted as ‘The way of spiritual harmony’. Accordingly, when training in Aikido you will be blending with and redirecting the force and motion of your attacker and avoiding a physical clash. This way you can control your opponent and subdue them without hurting them.

The Aikido syllabus contains many different techniques, from both a standing and sitting position, with throws, joint locks and pins. It also includes training with Jo (staff), Bokken or Ken (Sword) and Tanto (Knife) which are traditionally made from Japanese oak.

O-Sensei had many senior students during his life, some of which went on the create their own Aikido organisations.

Tonbo Aikido, a member of the Takemusu Iwama Aikido organisation, follow the teachings of Morihiro Saito, Shihan (1928 – 2002) who, from 1946 until O-Sensei’s passing in 1969, served as the founder’s assistant and then as the head teacher at the Iwama dojo and also caretaker of the Aiki Shrine.

Saito Shihan’s aikido is renowned for it’s focus on basics, with the understanding that having mastered these you can easily progress to the flowing style whilst maintaining the power, control and overall supremacy in an attack situation. 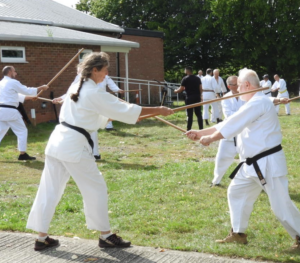